The top 30 companies in Bursa Malaysia registered strong profit growth, as measured by earnings per share, of 18.2% in the first quarter of 2014. However, looking beyond the bottom line figure reveals profits boosted by one-off gains amid sluggish revenue growth.

The sluggish revenue growth is surprising given that the Malaysian economy chalked up an impressive y-o-y gross domestic product (GDP) growth of 6.2% in 1Q2014. GDP grew 5.1% in the last quarter of 2013. GDP is defined as the sum of all goods and services produced in an economy.

Let us first look at how Malaysian corporates fared in the first quarter.

Overall, corporates performed slightly better in the first quarter of 2014 even after stripping out the one-off gains. Revenue growth turned positive after being in negative territory since December 2012. Profit and sales growth was also marginally higher. 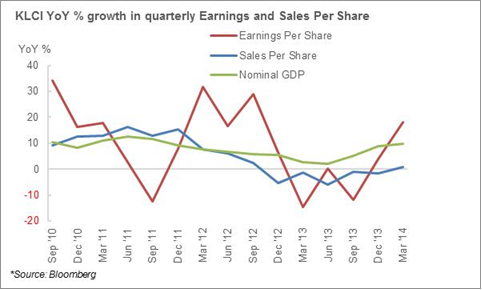 The FBMKLCI is a market capitalisation-weighted index of the top 30 companies in Bursa Malaysia. As such, it is often seen as a good proxy and bellwether for Corporate Malaysia.

FBMKLCI companies registered strong profit growth of 18.2% y-o-y. Compared to the previous quarter, profits grew by 10.7%. This good set of results seems to be consistent with the impressive GDP growth registered by the economy in Q1.

However, things look less impressive once we strip out exceptional items from the bottom line.

In the case of the first quarter results of FBMKLCI companies, an abnormally large exceptional item was recognised by IOI Corporation Bhd. This in turn skewed the profit figures of the FBMKLCI upwards.

On the revenue side, growth has turned slightly positive with a 0.8% increase, marking the first time since 1Q2014 that revenue has not contracted.

The uptick in revenue and improvement in cost-side management contributed to an increase in profit margins in the first quarter.

At the moment, the operating profit margins of the FBMKLCI are about 19.6%, which is a 2.4% improvement compared to a year earlier.

However, revenue growth is still weak and companies cannot rely on keeping costs down to maintain profit growth. This is because inflationary pressure will eventually result in an increased cost base.

This will likely happen down the road due to the implementation of the goods and services tax (GST) in April 2015 and the possibility of further cuts to fuel subsidies. Bank Negara Malaysia has indicated that inflation will likely be between 3% and 4% in 2014.

So why has revenue and earnings growth been sluggish despite the strong economic performance in the first quarter?

Read more in The Edge this week.
Posted by tongkooiong at 15:57