The ODD mathematics of The World Cup

The recent second round playoff matches of the FIFA World Cup in Brazil have been very exciting,  with many of the deciding goals scored in the very last minutes of the matches, and often during overtime.

Two of the eight matches were decided by penalty shoot-outs, which were by themselves nail-biting. This included the match won by Brazil where Neymar scored the decisive penalty against Chile.

As a compulsive analyst, I was intrigued by the mathematical probabilities of the results of the playoff  games. Here are some of my observations: 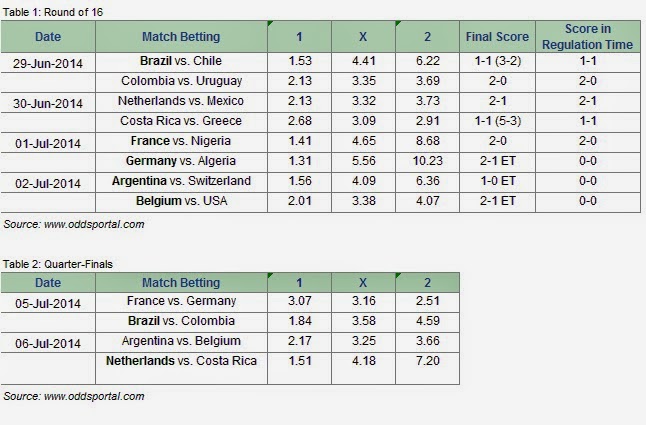 As betting odds and payouts are different for the scores at the end of the 90 minutes regulation time, and for the final outcome - including extra time or penalty, if any – I wonder if the results of the second round matches can be a useful betting guide for the remaining matches of World Cup 2014.

Looking at the pre-game odds for the quarter-finals, will the match between Brazil and Columbia and the one between Holland and Costa Rica go into extra time since both Brazil and Holland are strongly favoured to win?

Well, as football fans are happy to say, the ball is round and anything can happen.