Last week, we contrasted the budgets of Dewan Bandaraya Kuala Lumpur (DBKL) and the State of Selangor. The general conclusion was that given the two have relatively same revenue base, Selangor was spending its income much more efficiently than DBKL. This is because despite the fact that Selangor is far larger (in terms of number of residents or land area), it has a smaller operating budget.

Some people were unhappy and challenged my analysis on the basis that running a State is different from running a municipality. I acknowledge this fact. Indeed, comparative analysis is never absolute. No two municipalities have exactly the same mandate, requirements and expectations.

This week, I compare the budgets of DBKL with the municipality of Penang Island and Ipoh, as shown below. 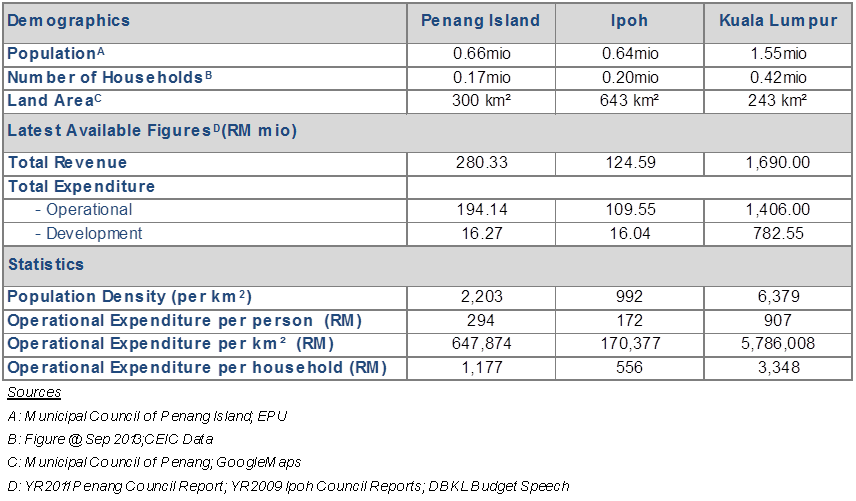 Are these cities totally comparable? No.

Kuala Lumpur is the capital city of the country and it deserves more attention and care. But we have also not taken into consideration that KL has a development budget of almost RM800 million while the other cities are operating on RM16million. So, perhaps this is more than sufficient to offset the difference in status of the cities.
Let me now move to the second area of misunderstanding, that assessments should be based on property valuations.

DBKL as a municipality operates on a budget, based on what it needs to meet the demands and expectations of its residents. The people have the right to expect that DBKL will be responsible, accountable and prudent in spending their money.

So, the first requirement is to question the budget. Is the budgeted amount fair and reasonable? This is why we have written extensively on this topic.

Once the total expenditure amount is agreed or acceptable to the people, then the next question is how to share the costs of running DBKL. A fair methodology used in most cities is to correlate the budgeted expenditure with the amount of assessment to be collected from each residence based on a percentage of the value of their property.

Now, assuming the total property values in City X doubled to $20,000 million. If we allow the rate of 0.8% to remain constant, then the City will have a $160 million budget to spend. But this should not be allowed. It will only encourage wastages and inefficiencies. In any case, the gains in property values are taxed indirectly through RPGT and income taxes on rentals.

Instead, the right approach is to first decide what is a reasonable budget for City X. Say it is raised from $80 million to $100 million.  Then, the assessment rate will be reduced to 0.5% of the property value of $20,000 million.

I like to add that the above methodology on property assessments is the most common form applied, as far as I am aware.

I hope I have sufficiently clarified and put to bed the main assertions I have made, namely, DBKL needs to be more efficient and transparent in the way it spends and revenue collection should not be tied to property values.