Fixing the budget deficit is critical, and it requires a political consensus

In every Budget, the government presents its fiscal and economic policies to promote and sustain growth. This year, we suspect the emphasis will be on social inclusion, reducing the cost of living such as housing. To achieve the stated objective of transforming the nation into a high-income society, realistic policies will have to be articulated to enhance labour and capital productivity.

This year, the markets will watch closely how the government intends to reduce its fiscal deficit and what measures will be taken to boost revenue as well as rein in its operating expenditure.

The spending binge in recent years has deteriorated government finances, especially after 2003 and 2007. Before that, there were only three instances when the government's total revenue cannot meet its operating expenditure. This was in 1972, 1986 and 1987.

In terms of interest coverage [(total revenue less operating expenditure and add debt service charges) divided by debt service charges], it has been on a downtrend since 1997 and at a critical level of only one. And this is despite the very low global interest rate environment of recent years. (See chart 1)

Malaysia's total debt now stands at RM737 billion (of which RM485 billion is domestic debt), rising by a compounded growth rate of 13% during the last 43 years. Dividing the debt service charges by the annual total debt will give us the cost of borrowings imputed to the government. As indicated by chart 2, this low cost of funding has been helpful. 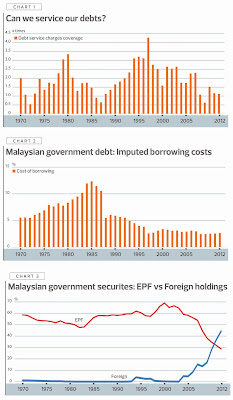 But with the reversal of the quantitative easing programme in the US, interest rates may well begin to rise. Further, any downward rating by international credit agencies will have significant consequences on the cost of borrowings, not just to the government but also to the private sector.

What is equally of concern is the percentage of domestic debt held by foreigners. Today, foreigners hold 27% of our total domestic debt. It was virtually non-existent before 2004. If the foreigners decide to cut back on their holdings, the consequences on our exchange rates and interest rates should give nightmares to some people.

Chart 3 indicates that theoretically, the Employees Provident Fund (EPF) could step in should the foreigners withdraw their funds. This would involve a rebalancing of EPF's portfolio, with massive selling of its stakes in Malaysian companies.

The resultant effect on the stock market is unthinkable. Also, the dividend payout by the EPF to its contributors will fall, since the interest rates on government securities are much lower than the long-term returns from the equity markets, both in Malaysia and abroad.

Finally, the share of the government's operating expenditure to total expenditure has exceeded 80%, rising consistently since 2002. The last time it happened was in 1987 and 1988. Basically, we have less money to invest for the future, in areas such as infrastructure, transportation, healthcare and education. (See chart 4)

From 1988 to 1997, the surplus of government revenue to operating expenditure grew every year. It peaked at RM21 billion. (See chart 5)

During this period, operating costs were kept in check, doubling during these 10years, while government revenue tripled. This was a period of rapid economic expansion, coupled with large privatisation exercises. Tax collected from companies alone rose from RM3.1 billion to RM16.7 billion.

For better or worse, 1998 was the year Malaysia entered into a new political economy, where politics influenced economic decisions more than ever.

With a vibrant and strong opposition, the Barisan Nasional government has increasingly succumbed to populist policies. To gain support, the government has been spending more on the civil service and handouts.

While democracy may offer greater freedom and voice to the people, short-term economic consequences are often negative.

This is not to argue against freedom or democracy. To quote Winston Churchill, "Democracy is the worst form of government, except for all the others."

What did we spend on
The single largest component of the operating expenditure is emoluments. If we add pensions and gratuity, it accounts for 36% of the total. From RM18 billion in 1999, it stands at more than RM74 billion now, growing at a compound rate of 11.5%.

In 2008, civil servants' payroll grew 26% in one year. Last year, it increased 20%. What is more frightening is that salary increases are permanent and will snowball in future years. (See chart 7)

Total subsidies account for 21% of the total operating expenditure. It grew from RM1.1 billion in 1999 to RM44.1 billion now, or at a shocking compound growth rate of 33%.

The problem with all subsidies is that once given, it is difficult to take away. The government talks of subsidy rationalisation and indeed, it must be done. But the political costs may be huge even if there is a will to implement it.

Short of a change in mindset, one will have to assume that each year, the budget will simply give a percentage increment over the previous year. And the price the government pays for each of these supplies and services will simply be in reference to past prices paid.

In contrast to the operating expenditure, the government is prudent on development expenditure. The compounded growth rate from 1970 is only 10.4%. This is due in part to the privatisation policy implemented.

The only area of concern in the development expenditure is that classified as "others". From RM581 million in 2008, it now stands at RM6.4 billion. A total of RM14.8 billion was spent under this category from 2009 to last year.

Representing 13.6% of the total development budget, surely there is a better name than "others" to explain what these items are. In fact, this item alone is as large as the sum spent on agriculture and rural development, healthcare, housing and social and community services.

Forecasting the federal government finances in the future 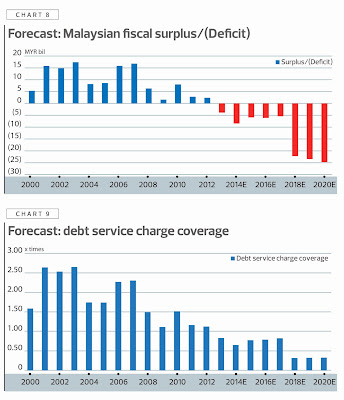 We did an analysis of the various expenditure items to try to understand what they are and how they came about. The objective is to try to forecast the federal government's revenues and operating expenditures.

We created our own simplified The Edge econometric model, based on conventional methodology.

All forecasts are necessarily wrong. Our goal is to ask the right questions and hopefully, indicate the trends.

The results of our econometric model are as indicated in the table. (See charts 8 + 9) 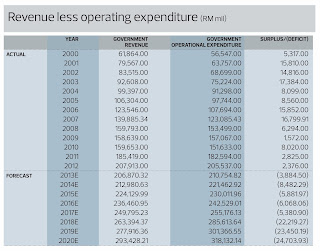 What our modelling implies:
1.  Without any new major sources of revenue, the fiscal deficit is not sustainable if the status quo is maintained and there is no cut in operating expenditure. This is highlighted in the projected interest coverage chart.
2.  Even with growing revenue from corporate and individual taxes, operating expenditure will grow at a faster pace. Emoluments are snowballing out of control, especially come another election.
3.  There is no option but to cut subsidy soon. When oil prices go up, the increase in subsidy is greater than the additional revenue the government receives. Even when oil prices fall, the subsidy may not decrease due to rising domestic consumption.
4.  Hoping for higher oil prices to get the economy out of the jam is unwise. The forecast is for lower prices with additional production coming from the US. And unless we address the fuel subsidy, the cost will be higher than the tax revenue derived from higher oil prices.
5.  There are limited options for the government to substantially increase its revenue, except for the Goods and Services Tax (GST). Even at 5% GST - generating RM8 billion in additional revenue - and netting off sales and service tax would yield about RM3 billion. This will improve the fiscal position, but not by much.
6.  Assuming a full-year implementation of a 10% GST rate, it will generate about RM25 billion (depending on items that will be exempted and zero rated). Without addressing total operating expenditure, particularly subsidies, there is no way for individual tax rates to be reduced. In other words, GST will likely be just an additional tax on society.
7.    The incumbent government will not have the financial resources to spend come the next general election, as if they do, the forecasted deficits as per the model may become the reality.

We are aware that we are concentrating our discussion on operating expenditures. The sustainability of deficits is related to the ability to borrow, which is based on your ability to pay back. It is possible for the government to cover the operating shortfall by reducing development expenditure. But this would be cutting back on long-term investments, and this is not sustainable on its own.

To relate this to an average household, you want to make sure you are earning more than your spend, and not dig into your savings. Cutting back on development expenditure is like cutting back on your children's education.

The government's state of finance requires bold and courageous actions to bring down the operating expenditure. It is difficult in a climate where it is highly polarised, whether in politics, race or religion.

The opposition will say no new taxes, no cuts in subsidies and more pay for civil servants. We need to remove the high costs of corruption and wastage. The problem is, such arguments cannot be quantified.

The people are concerned about the state of finance, but they do not want new taxes, since all taxes introduced become permanent. They want assurances that the introduction of GST will be tied to a lower personal income tax rate. And they want to know that the government, too, is tightening its own belt.

We need to cut subsidies quickly, cap the size of the civil service and impose GST, but also announce a gradual reduction in personal income tax rate over time. At the same time, the people must be satisfied that corruption and wastage are seriously addressed, and showing results.

This requires some form of political consensus. A bi-partisan approach would be helpful instead of the partisan political posturing we are seeing.

In the US, the Republicans and Democrats make compromises and come together in times of crisis as we just saw with the debt ceiling issue.

Will Malaysian politicians be equally mature and capable of bi-partisanship?


The Edge's Wish List
1  A push towards greater social and economic inclusion. To be economically inclusive, we must do away with rent-seeking activities, profiting from granting and securing licences and monopolistic practices. Anti-competitive behaviour should be rigorously prosecuted.

2  Support Malaysian workers and move the economy towards higher income by introducing a wage rebate scheme. Around 82% of all working Malaysians are currently paid below RM4,000 a month. The introduction of GST will have a substantial impact on their cost of living. These workers need wage adjustments to cushion the impact.
A wage rebate scheme will encourage employers to raise the wages of their employees. The government subsidises half the increased wages for a limited period, say two to three years. The companies will have to become more efficient as their cost of labour will be pushed up permanently.

3  Invest more in public transport and improve connectivity. This will reduce cost of living, pollution and traffic congestion.

4  Set up more vocational training and hospitality schools to improve technical skills and thereby increase the wages of these workers.

6  Make housing more affordable by removing risks so that the industry can be more competitive. These risks include regulatory ones with respect to approvals and timing. Also, allow developers to withdraw their launches if sales targets are not met. This could be disclosed transparently at the time of sales. By so doing, the risk of default, abandoned projects and bankruptcies will be minimised.